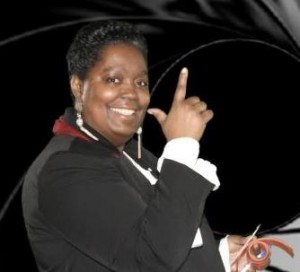 When serendipity steps in, it can be a delightful surprise.  The Friends surprise showed up as Cheryll Pinder!  She was working in the building that is home to the Friends office when she met Leisa one day in the lunch room.  Cheryll was interested in helping Friends of the SLU Liver Center and first volunteered for the 2014 Diamonds Gala.

Cheryll at the 2016 Diamonds Gala

At last year’s gala, Cheryll brought the raffle ticket sales to an all-time high and motivated her fellow raffle volunteers!  Cheryll has a cheerful spirit and is a joy to work with.  This year she joined the Diamonds Planning Committee and is our Leader in the Raffle Booth area – please tell her THANK YOU for her service when you buy your raffle tickets!

The Friends of the Saint Louis University Liver Center extend our sincere gratitude and appreciation to Cheryll for the support she has provided and the Friend she has become! 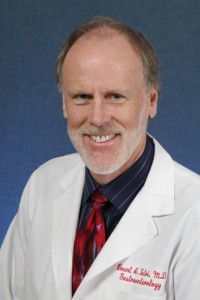 Dr Brent Tetri is a medical graduate of Yale University, who then completed his internal medicine residency at the University of Wisconsin in Madison before going on to do a fellowship in Gastroenterology and Hepatology and the University of California at San Francisco.  He came straight from that fellowship to become a junior faculty member at Saint Louis University in 1990 and has risen through the ranks from assistant to associate and now full professor with tenure.  Dr Tetri took over from Dr Bruce Bacon as the Director of the Division of Gastroenterology and Hepatology at SLU in 2010.

Dr Tetri’s interest in liver disease was nurtured at UCSF under the tutelage of many of the greatest researchers in liver disease as that institution has always been a powerhouse of hepatology and the home base for a number of presidents of the American Association for the Study of Liver Diseases.  Some of his early research papers were related to mechanisms of liver damage and then he turned his attention to looking at how this liver damage led to scarring or fibrosis in the liver.

His encyclopedic knowledge of how the liver works and its role in metabolism led him naturally to study non-alcoholic fatty liver disease – an emerging serious health problem that now affects more than 1 in 5 Americans.  In some individuals fatty liver disease can cause progressive liver damage and scarring of the liver, ultimately resulting in cirrhosis and even liver cancer and it is rapidly taking over from hepatitis C as one of the major diseases dealt with by liver specialists.

Dr Tetri has played an important leadership role in a small and select group of researchers funded by the NIH to study fatty liver disease – the NASH Clinical Research Network.  Over the course of the last decade, they have come up with now-standard definitions of the disease, and they continue to follow a large number of patients recruited from SLU and other centers around the country to determine the outcomes of having fatty liver disease.  In the midst of doing this, these researchers have begun to find new ways of treating fatty liver disease and Dr Tetri has made Saint Louis University into a national center of excellence trying to discover treatments for this potentially fatal disease.

In addition to his research excellence, Dr Tetri is an outstanding and compassionate physician who provides excellent care for many patients with liver disease inside and outside of the hospital.

Last but not least, it is important to emphasize his leadership of the Division of Gastroenterology and Hepatology.  Taking over from someone like Dr Bacon was not an easy thing to do, but he managed it with grace and determination.  In that leadership role, he is often called upon to find the best uses for the funds raised by Friends of the Saint Louis University Liver Center, so we think that will make this award even more meaningful to him.  Congratulations Dr. Tetri!

Make plans NOW to join us for the Friends of the Saint Louis University Liver Center's 17th Annual “Diamonds” Gala at the Chase Park Plaza on October 26, 2019.

The evening’s festivities will include a cocktail reception followed by a sumptuous three-course sit-down dinner and live auction which raises funds for critical, life-saving research of liver disease!